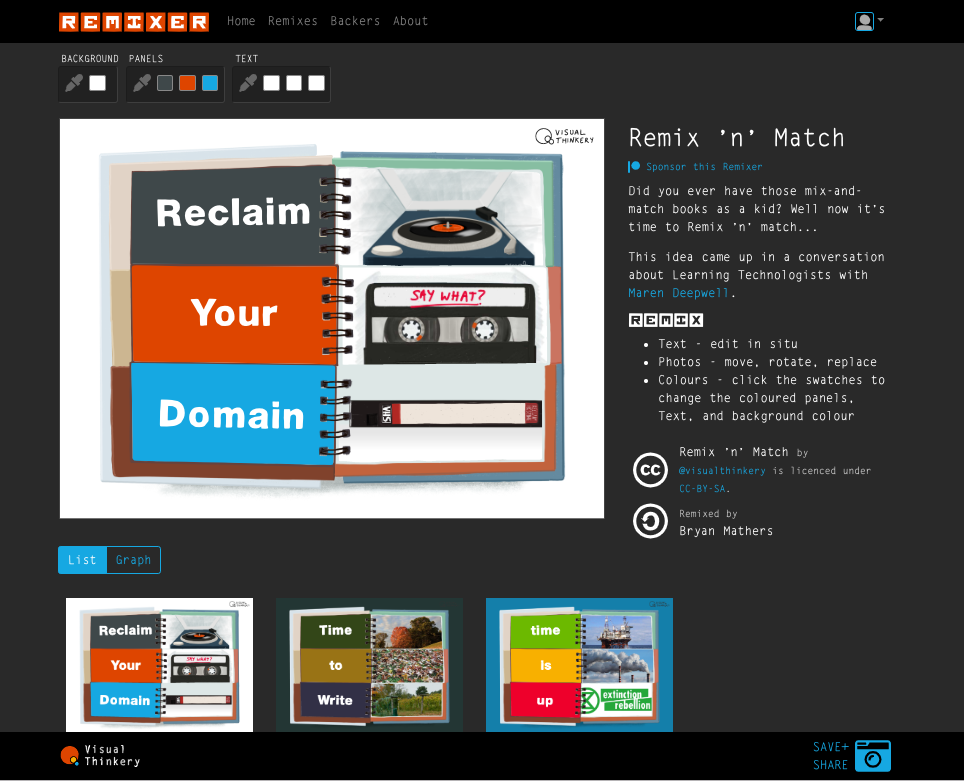 I do love myself some Visual Thinkery creativeness, and I’m not gonna lie, when it invokes Reclaim Hosting I am a complete sucker

Bryan Mather’s latest twist metaphor for the Remix Machine is the Flip Book, and it is oh so good! Reclaim Your Domain indeed! And Reclaim the awesome sense of artistry, inspiration and just plain fun! So, I couldn’t resist a quick riff on my last post! 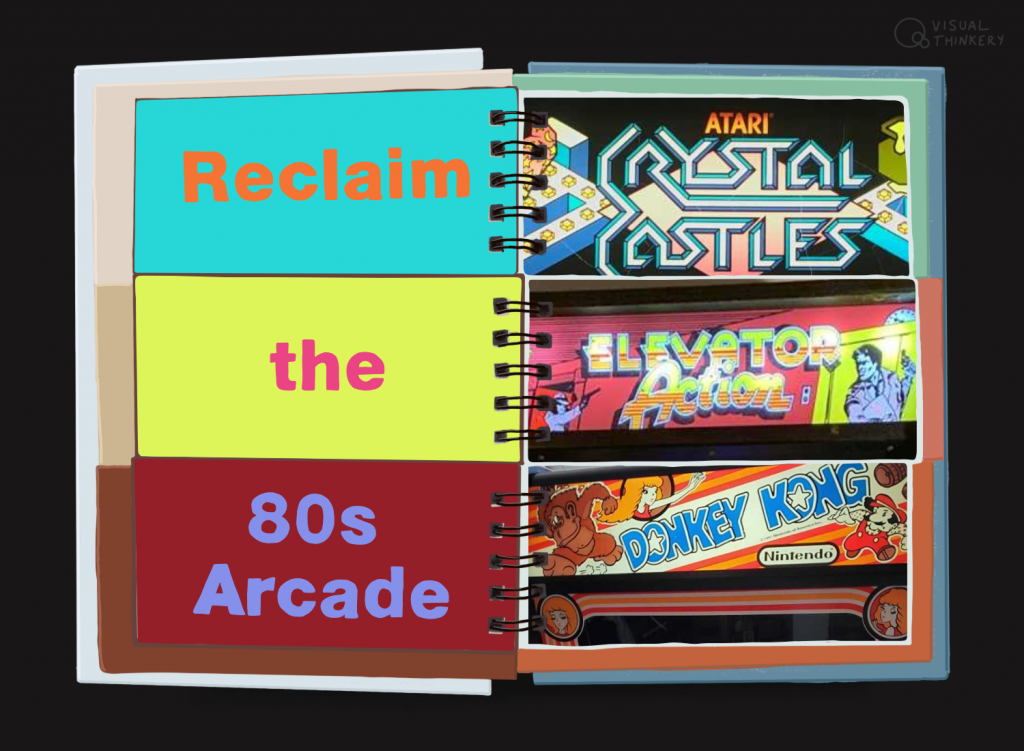 The Remix Machine runs on support from folks like you reading this, so if you have the means and are so inclined, support some local web art!

You may have to click on the above image for the full effect, but I just wanted to take a moment to recognize that I’m officially off the 8 AM to 10 PM (Eastern US Time) support schedule. I still cover 6-7 hours of support from 1 AM to 8 AM, when things are much slower, but being freed up after that is pretty huge. It’s been over 6 years in the making, but the prospect of liberating myself from a 12-14 hour work day sometime soon is the stuff dreams are made of. I’ll talk more about where Reclaim is going and what got us here, but on this Monday I am just going to enjoy a bit of the afternoon sans support tickets.

It’s no exaggeration to say that @BryanMMathers changed my aesthetic life indelibly when he began visually animating @reclaimhosting’s soul. We love this guy! And he is an amazingly generous collaborator. https://t.co/eo14nVNNiN

It’s been over 4 years since I met Bryan Mathers in Barcelona, and I regularly count my lucky stars for that chance encounter. While shooting the shit at a table with a selection of fine folks Bryan quickly sketched out what would be the iconic image of Reclaim Hosting, one that remains near and dear to my heart. The Reclaim Vinyl icon:

Since then we have collaborated on quite a few projects and he has been an absolute joy to work with. He is the best kind of art therapy for your organization

In fact, a believe it is the Reclaim aesthetic, which has evolved to the VHS tape, that has provided us the freedom to actually create fun projects like Reclaim Video and Reclaim Arcade with a certain amount of impunity. I personally think the power of art is woefully undervalued or overlooked in edtech, which is a shame given how much an organizing visual principle makes for good design. In fact, the coolest thing about Reclaim Hosting has been the ability to collaborate with artists like Bryan Mathers, Michael Branson Smith, and Ryan Seslow. And hopefully we will get the opportunity to work closely with Amy Burvall here soon as well, I think we can play with a whole Putin-inspired 80s Soviet revival

In fact, Domains19 is very much premised on the idea that we should be focusing more on art to communicate what is happening with tech that everywhere surrounds us. it is a tall order, but in the spirit of #ds106 we are all artists, and we should spend a lot more time exercising this facility that everyone has access to. 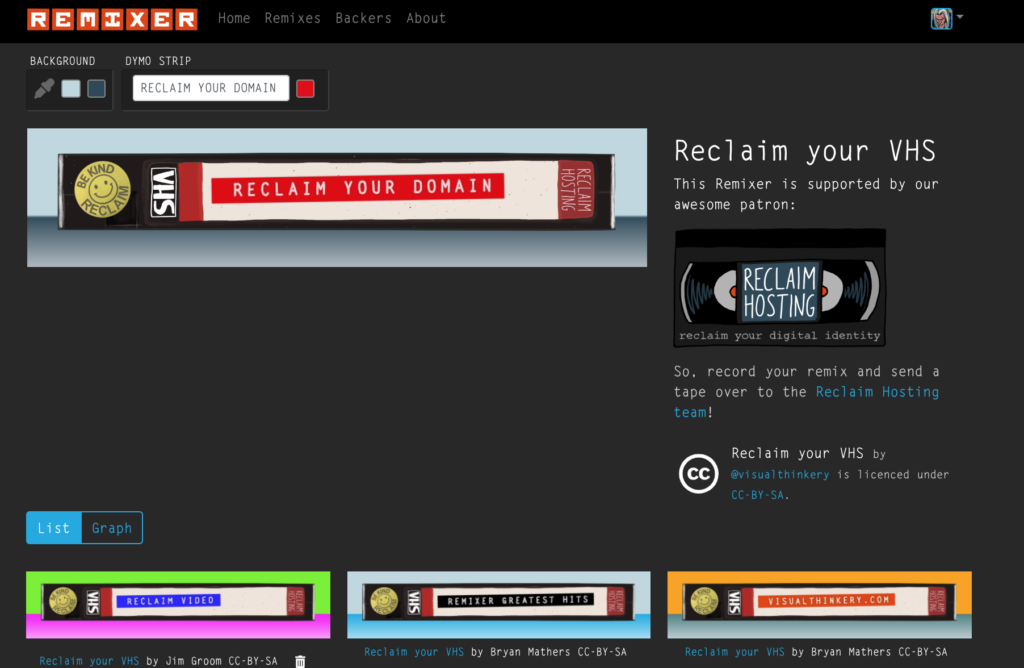 Anyway, I’ll step off my soapbox here for a second to plug our most recent collaboration with Bryan Mathers in which he has created the Reclaim VHS tape as remixable object in his amazing Remixer machine. He wrote a most kind post about the project, and we are happy to regularly support his work in all its wonderful emanations. In fact, you should too. In these troubled times I want to believe it is the artists, not the politicians, that will light the way forward and give is a vision to believe in, so I’m gonna double-down on that belief with my support, and a Remix or two

Lauren ran an awesome episode of Reclaim Today yesterday (I’m not biased!) wherein Tim, Lauren, and I did a live, streaming discussion about the “History of Reclaim Hosting.” It may a bit early for the Reclaim biopic to be picked up by Hollywood, so we’re getting out in front of that tidal wave now

Major kudos to Lauren and Judith for thinking of this as a way to give new, remote employees a sense of the history of Reclaim, and while we will not only be interacting with new employees through the new flesh of video like Dr. Oblivion, I enjoyed capturing this moment of our growth and tracking how our own little mythos of Reclaim is getting built. “The planet is screaming for change, Morrison, we gotta make the myths!”

We all have our origin stories and they’re all more complicated then we let on and often elide various realities, but they also remain essential for defining who we are and where we are going, and I luckily remain quite proud of the stories we tell at Reclaim and who we are!

One of the cPanel scripts I’ve found really useful as of late is the whoowns script that let’s you know which account owns a specific domain. Let me provide a quick scenario.  You have an issue with a domain and you can’t figure out which account in lives in, which could mean it’s an addon domain that wasn’t registered through us, etc. Tracking it down can be a pain. You can figure out what server it is on by using a command like nslookup (nameserver lookeup) that will tell you the hostname and identify the server:

The above command will return something like beathap.reclaimhosting.com.  Which means the account is on the Beathap server, but given it is not the primary domain of an account it is not going to appear in the list of all cPanel account. And this is where I would get stuck.

But using whoowns will tell you the account owner, just log in via terminal and use the following command:

That will tell you the account that domain lives in which means problem solved. A simple, useful script.

So, when extolling its virtues in Slack I wrote /scripts/whoowens —and soon after Tim had some fun and wrote his own script. So, when you run /script/whoowens on any of Reclaim’s servers you get the following:

Amen, Harry Dean! All this talk of coding or being coded is besides the point, when push comes to shove most people simply need a code. I come back to Repo Man (1984) a lot when I am thinking about Reclaim Hosting‘s code. In fact, I already played on the idea of a Reclaim Code with the above clip. So when sitting down to talk to Bryan Mathers earlier this week about some artwork I was excited when I found the discussion led us into the territory of this 1980s punk cult classic.

END_OF_DOCUMENT_TOKEN_TO_BE_REPLACED

I’m deeply skeptical of meetings. Ten years in higher ed will do this to you. I spent much of the last four years intentionally removing myself from the meeting culture that everywhere pervades. The thing that drove me craziest about meetings was the twisted logic that by simply being there you’re working. It was like Woody Allen’s quote “Showing up is 80 percent of life” immortalized through institutional cultures. Now my reaction may be a bit extreme, but that’s probably because in higher ed the extra bonus of meetings being conducted as pseudo-seminars is particularly painful. My approach is simpler: regularly share what you’re working on through your blog and we can meet in the comments. While I recognize that isn’t always feasible or even appropriate (and no one comments anymore), I can still dream, right?

Anyway, today Reclaim Hosting had it’s first official all-hands meeting after two and a half years as a company. We held out pretty long, I’m proud of us. And as much as I kid on Twitter, this isn’t the beginning of the end. Rather, it is the beginning of the beginning. Joe McMahon called for the meeting given he thought it would be nice to convene regularly at some point during the week. And meetings are definitely better when you’re not forcing them down people’s throat. Hell, it was fun to catch up with everyone for an hour to learn tricks in CPanel, sharing about various projects, reminiscing about how awesome Fall has been, and project what’s to come. I could get used to it once a week, but I’ll just say now, for the record, we must be vigilant.

Meeting creep is akin to The Blob‘s (1958) plotline. It starts out as an innocent kiss at Lover’s Lane and quickly ends up eating you alive…

Ultimately resulting in an Air Force air-lift to the Arctic for who knows what’s next?

You’ve been warned Reclaim, and this ain’t no juvenile delinquent scare tactic either, this comes from a hardened veteran whose very being is evidence of the deleterious effects of meeting culture in the workplace. AVENGE ME!